One of the things I do at work is send out and label boxes. When I was preparing a few boxes to be sent I started to collect the waste scraps of tape and paper that was left behind. They were made by a happy accident (the previous labels had to be removed and these were the edges of those labels). I thought they deserved more than being thrown away with peoples banana skins and boots meal deal left overs.  I really like the shapes, colours and textures that have been created. It also made the task much more enjoyable too!

If you click on an image you can view a larger version. 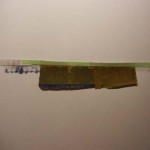 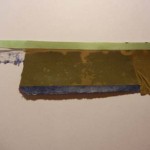 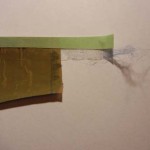 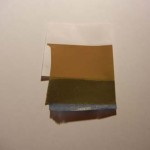 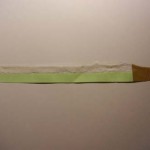 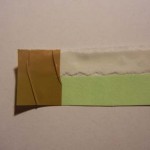 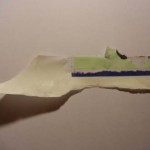 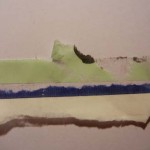 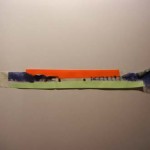 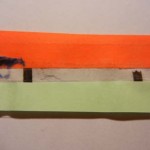 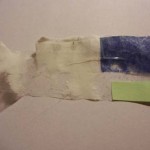 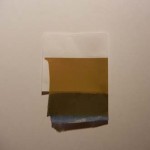 Rebecca Ward makes beautiful tape installations. My friend K sent me the link today and I cannot get over how long this must have taken, and the patience too. As someone who has worked with tape before, I know the furstrations it brings all too well. She uses a mixture of duct, electrical & vinyl tape. I think you’ll agree these are great!

How long is a piece of string?

I think that this piece was the most successful out of the three. It was a development from measuring physical objects with string, to measuring time.

A lot has happened since Sherwood Arts Week which has given me the time to think about how it all went and what’s next. I was very nervous about our first open studio event. I work full time and had an important deadline on the day before the studio was due to open its gates. I hadn’t exhibited for about 5 months and some of my ideas were very new, for example the video piece ‘Five and a half square feet’.

I couldn’t have been happier with the amount of people who came along and the level of engagement was brilliant. I think because it was a weekend, daytime event people had more time to stop and share opinions. Also there was a regular flow of people instead of everyone arriving at the same time which meant that you could give people your time.

Getting that excited feeling about my work where I’m thinking about it all the time. Have been practising making squares with my feet using tape. Like the idea about making floor based work. I would like to show documentation as part of the work.

Got a few ideas up my sleeve for the stall, potentially involving spreadsheets.